Rising energy prices lead to a shortage of carbon dioxide (CO2) and carbonic acid (H2CO3). The carbon dioxide used for carbonation is the basis for fizzy soft drinks or refreshingly sparkling beer. The drastic shortage is therefore becoming a problem for numerous beverage manufacturers. However, there is an alternative. Nitrogen can be used as a substitute gas in many production steps of beverage manufacture and thus alleviate the lack of CO2 and carbonic acid. With the help of Inmatec nitrogen generators, the gas can be generated directly on site in order to ensure the supply at all times.

Pure CO2 for industrial use is mainly produced as a by-product of fertilizer production. Due to the sharp rise in gas prices, however, the production of fertilizers has been scaled back considerably. At the moment, CO2 deliveries are around 30% of the usual amount. This CO2 deficiency is currently also leading to a shortage of carbonic acid, a reaction product of CO2 with water.

Apllication in the industry

Carbon dioxide or CO2 is extremely important for the beverage industry. Here it is used for the carbonation of soft drinks and beer, among other things. But it also serves another purpose. CO2 is also used as a protective gas in many other process steps to prevent the beverage from coming into contact with oxygen. For example, after beer has been stored, any chemical reaction with oxygen must be avoided, as this could trigger microbial infections or oxidative enzymatic reactions. Undesirable changes in taste and a reduced shelf life would be the result. For this reason, the storage tanks are filled with protective gas from above when their content is being transferred to the transport or filling tanks, which completely displaces the air with its 21 percent oxygen content from the container. The empty and cleaned tanks to be filled are purged and pressurized with nitrogen to protect the beer from oxidation. Inert gas is also used for rinsing and prestressing when the beer is filled into bottles and kegs. It is similar with the production of other beverages such as soft drinks, fruit juices or wine. Immense volumes of protective gas are required for these processes. Large breweries often have enough fermentation carbonic acid to cover these production processes. However, smaller breweries or soft drink manufacturers don´t, and so they are forced to buy large amounts of CO2.

Nitrogen (N2) is also an inert and protective gas and represents an alternative to CO2. It can be used in beverage production wherever contact with oxygen must be avoided. Large amounts of CO2 can be saved in industry through the use of nitrogen.

N2 is a climate-neutral gas and makes up around 78% of the air. Inmatec nitrogen generators offer the possibility of generating the nitrogen required in the beverage industry directly on site from the ambient air. Based on pressure swing adsorption (PSA) technology, compressed air is fed into two adsorption vessels filled with a carbon molecular sieve. This happens alternately, so that initially only one container is filled. Here, oxygen and carbon dioxide molecules are filtered out of the ambient air by being adsorbed by the molecular sieve. The nitrogen molecules move unimpeded through the container and are directed into a product tank. When the molecular sieve is saturated, the compressed air in this container is released and the sieve regenerates, while the adsorption process is now repeated in the second container under compressed air. The nitrogen stream that is continuously generated in this way has a food-compliant purity of at least 99.5 percent and can now be used in the desired areas of beverage production. The N2 is supplied via a network of lines to various delivery points in the plant with the help of compressors and gas mixers, which are present in every brewery, for example to control pneumatic container flaps, to support wort aeration and yeast fermentation or the aeration of yeast propagators.

The modern N2 generators also have an extremely efficient technology for air distribution in the adsorption tanks. Less compressed air and therefore less energy is required, and nitrogen is obtained from smaller amounts of air. That's easy on the wallet. With the help of the latest remote control technology, all functions and parameters can also be monitored and controlled online. The N2 generators from Inmatec can be fully integrated into existing house compressed air systems.

The continuous on-site nitrogen production makes the manufacturers independent of the external gas supply and delivery bottlenecks. In addition, by reducing CO2 emissions, the carbon footprint. This helps beverage manufacturers to comply with the ESG guidelines of the EU, which call for sustainable action in ecological (environmental), social (social) and legal (governance) areas and, above all, to protect the climate and the environment. 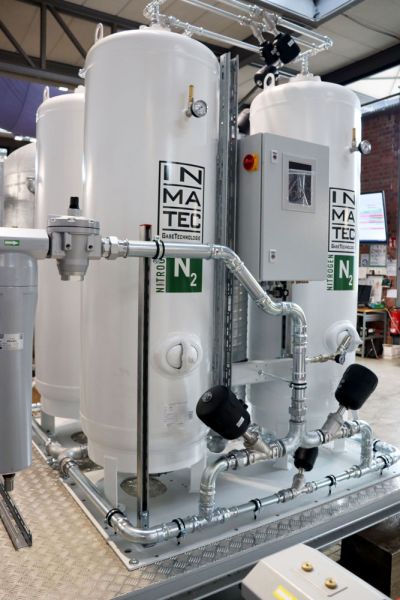